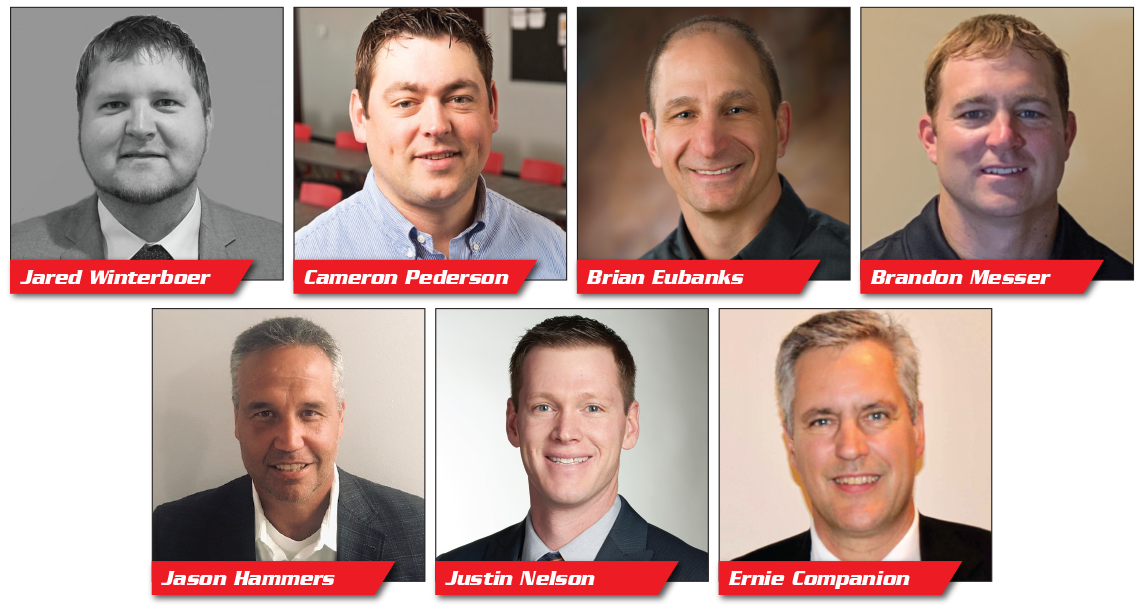 Cameron Pederson has been a member of DSG’s team for 19 years in several roles and will now oversee sales activities across its North Dakota region, including branches in Bismarck, Dickinson, Fargo, Grand Forks, Minot and Williston. Prior to this promotion, Pederson held the role of Account Manager for DSG’s Fargo, ND location.

Brian Eubanks has held a variety of progressive roles within DSG for 29 years and will now lead sales activities throughout its Wisconsin region with branches in La Crosse, Plover, Rice Lake, Sheboygan and Winona, MN. Eubanks was an Account Manager for DSG’s La Crosse, WI location before his promotion.

Brandon Messer has held a variety of DSG roles since starting as an intern 17 years ago and will now lead the electrical sales activities throughout the Minnesota region with branches in Alexandria, Austin, Bemidji, Grand Rapids, Ham Lake, Monticello, Oakdale, Plymouth, Rochester, and St Paul. Before this promotion, Messer was an Account Manager in the Twin Cities metro market.

Jason Hammers has been with DSG for seven years, and prior to that held a variety of roles with mechanical contractors. Hammers will now focus on sales activities for the mechanical segment throughout the South Dakota region, including branches in Aberdeen, Mitchell, Pierre, Rapid City and Sioux Falls. Previous to his promotion, Hammers was an Account Manager for DSG’s Sioux Falls, SD business.

Justin Nelson is a new addition to DSG’s team and will now lead sales activities for its Montana region, including branches in Billings, Bozeman, Helena, Kalispell and Missoula. Prior to joining DSG, Nelson gained experience from a variety of roles in the mechanical industry, most recently as part of the selling team for a manufacturers rep firm based in Montana.

Ernie Companion is new to DSG and will now lead mechanical selling activities throughout the Minnesota region with branches in Alexandria, Austin, Bemidji, Grand Rapids, Ham Lake, Monticello, Oakdale, Plymouth, Rochester, and St Paul. Before joining DSG, Companion worked both in the manufacturing and contractor sides of our industry. Most recently he was Director of Business Development for a global provider of critical communications systems.

“Delivering value to our customers is paramount to our success, and our salespeople are the key conduit to make this happen,” says Mike Meiresonne, DSG’s Chief Operating Officer. “The Regional Sales Managers will ensure we recognize and deliver best practices throughout the sales organization, while tailoring those to serve each of our local markets.”